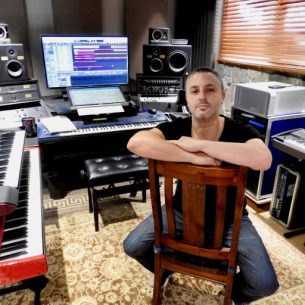 Out of his new Studio Phil has already produced tracks for Guy Sebastian, X-Factor’s Chynna Rae Taylor, and Brentwood. He is also currently writing and developing an album for Antonia Bennett, daughter of Jazz icon, Tony Bennett.

Foundation80 now sets the scene for Phil to develop, record, programme, compose, and produce up and coming Artists.

Whether it be a simple recorded accompaniment, or fully produced single, a co-writing demo, or even advice about a song you have written, Phil & Foundation80 cater for any budget. In 2018 Phil is offering Artist Development Packages ranging from 1 month, 3 months, or even 6 months.

Phil has worked with both local and International artists as a Pianist, Composer and Producer.

From composing music for the Sydney Olympics and World Youth Day ’08, TV Themes, and playing with International Jazz Artists, his flexibility as a musician keeps him in constant demand.

His credits are too many to list, but include the likes of – Hugh Jackman, Olivia Newton John, John Farnham, Guy Sebastian, Jimmy Barnes, Vanessa Amorosi, Gary Pinto, Jessica Mauboy, Westlife, K.D. Lang, Paulini, and numerous others. In 2016 Phil was Musical Director for Richard Marx’s Australian Tour. In 2017 he was keyboardist for Peter Criss’s (KISS) farewell concert.

As a keyboardist/pianist, he has played with international jazz acts such as Dave Weckl, Ric Fierabracci, Virgil Donati, Tom Brechtlein, Will Kennedy, George Garzone, Larry Carlton, Gary Meek, Antonia Bennett and many others.

Phil and his band ‘Hemispheres‘ were nominated for a Grammy in 2008, for ‘Best New Contemporary Jazz Group’. In 2015 his solo album ‘Signals’ reached no. 23 on the US JazzWeek charts.